I was sitting on a bench on the Wildwood N.J. boardwalk, killing time with a brain-dead smart phone and a birch beer, waiting to... 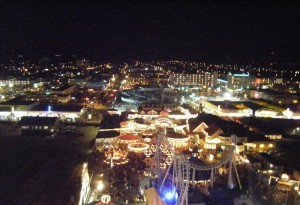 I was sitting on a bench on the Wildwood N.J. boardwalk, killing time with a brain-dead smart phone and a birch beer, waiting to meet friends for dinner. For dessert: The Grand Tour…of the Irish bars on and around New Jersey Avenue at the north end of the island, in the ancient fishing village of Anglesea. Maybe I would volunteer to be the designated driver. Or not. It was a Saturday evening and a jaw-dropping sunset had painted the horizon above the back bays pink, gray and gold, the setting sun a huge orange fireball descending slowly into the salt marshes. Across the island thousands of lights slipped out of the crypt of daytime hibernation, neon vampires sinking their million-candlepower teeth into the soft throat of the night. My favorite quarter-hour in the daily cycle of The Wildwoods; that syrupy transition between glittering sunlit days and nights filled with anticipation and rife with possibility.

I was born in Philadelphia and grew up in the suburbs but like so many people from the Philly area spent most of my summers living, working and partying at the Jersey shore; the REAL Jersey shore. I found a tattered old photo album recently. There were pictures of me eating dinner with the family in a high chair at Groff’s, riding kiddie cars in the vast old Casino Arcade and building sand castles on the beach with my dad. I was smiling in all of those pictures. I was a happy kid. In high school and college I spent some crazy, memorable summers in Wildwood, summers of sex, drugs and rock and roll…and skee-ball. More skee-ball than sex, actually.

Now, much older if not necessarily much wiser, I watch the endless parade of people pass by on the crowded boardwalk, a swirling confection of humanity. I don’t think unkind thoughts about any of them, because I’m working at being a better person, Mother Teresa with a beard and shades. Behind me, late stragglers leave the beach, sunburned and weary but happy, ready for the showers that will wash away the sand and sunscreen. Hovering gulls bicker over leftovers as timid waves tap dance politely into shore. Wheels of fortune spin, music plays, barkers bark and the amusement rides on the piers whir, bang and clatter into operation.

I see small children with their parents and think about my mom and dad, gone now. Older siblings herd younger ones along and I remember my sisters, grandmothers now, as high school girls. I remember my Mom, sweating but happy, cooking a big Italian dinner at our ‘summer mansion’ on Glenwood Avenue, Dad and the uncles playing cards, a Phillies game droning into extra innings on TV, my sisters and their friends talking about boys and bands, nursing sunburns, hair in curlers. I see groups of high school friends having fun and remember myself at that age, an age when we’re all indestructible and indomitable, when time is on your side, an ally, and the future seems brighter than the fireworks on the Fourth of July, consequences something that dwell in a galaxy far far away.

I see happy young couples holding hands, smiling those private little smiles, hormones in overdrive, and I think of old girlfriends, about cheeky bikini bottoms, tan lines and beach bums, lean coppertoned bodies glistening in the August sun. I hear giggles in dark motel rooms in the first hours of morning, No Vacancy signs flashing outside the window, curtains stirred by the cool breezes of the coastal night. I know what happened to some of those old girlfriends, good, bad and whatever. But many have just faded away, into the swirling crosscurrents of time. I wish I knew how their stories played out but maybe its better that I don’t know; I can fill in the blanks with fiction and believe in the happily ever after. I can remember a time when we were young and crazy and bought two tickets to paradise from the wise old woman in the lighted kiosk next to the bumper cars and the cotton candy.

What goes around comes around and what goes around is you and me, riding the carousel of years, always reaching for that brass ring. One day you’re a kid, before you know it you’re eligible to join AARP. My feelings about it all tumble into a blender of emotion and spin like a banana smoothie with a drop of Tabasco as I watch past, present and future converge before my eyes like scenes from an old home movie, the ebb and flow of time like the tides an endless cycle. There’s a sadness, a wistfulness, for good people and good times that are gone and are missed, for all the plans and relationships that didn’t quite work out. Still, you’re happy that you had those people and times and have the memories, clutched like a stuffed animal close to the heart.

In Boardwalk Empire, digital artists recreate the Atlantic City boardwalk of the 1920s. In my mind I recreate the Wildwood of my childhood and youth, buy a night at the Memory Motel. You push the big lever and it’s yesterday once more, in acid-trip Technicolor. The glory days of Hunt’s Pier, with the Flyer, the Golden Nugget, the pirate ship Skua and Jungleland, the Hell Hole on Sportland Pier and the creepy haunted house on Surfside Pier, Pierre’s House of Pancakes and Nate’s hot dogs and the goofball Aqua Circus. The Big Flamingo and the PT 109 out on the water, a small plane dragging a banner advertising the lobster specials at Zaberer’s droning low along the coast.

I switch on the projectors and reopen the musty old shore theaters–the Strand, the Blaker and the Ocean–kick-start the stacked amps in sardine-packed clubs like the Playpen, Rainbow, Mansion and Penalty Box, Henry’s and the Poplar Café, the beer, laughter and conversation flowing from open taps, the dance floor vibrating. I resurrect all of the romantic old motels, welcoming outposts of the neon night, so many demolished and replaced by cookie-cutter condos: the Aladdin and Ala Kai, All-Star and Alps, Shalimar and Sea Kist, the 24th Street and Time and Tide. And oh yes, the Sonata and the bathtub in Unit 12, memorable midnight ménage a trois with a blond and Mr. Bubble. Time in a bottle: I remember stumbling out of the Oceanic Hotel bar after a long night of drinking and making it a few blocks before walking straight into a roller coaster. I bounced off, sat down next to the fence in the rain and waited for dawn. I can still hear the familiar clatter of that coaster, the Jack Rabbit, a rickety old wooden behemoth. It was at the top of the Jack Rabbit, looking out across Wildwood, a wonderland by night, as a teenager that I first realized the town would be a great setting for a book or movie. Yes, what goes around comes around, sooner or later.

If you’re lucky enough to be a writer, you can recreate and revise the past, edit out the bad parts and manipulate it all like a 50-pound block of Play-Doh or sculptor’s clay into a novel. But life isn’t a novel or a movie. Nothing lasts forever. Times change, and you roll with it. In reality, the river of time flows in only one direction. You can’t reverse course, or you’ll go down and the lifeguards are off-duty, tossing back shots of Cuervo in Juan Pablo’s on Pacific Avenue. The intricate sand castles of memory are washed away by the real-time realities of a jangling cell phone and places to be.

I get up and I move on. I might look over my shoulder now and then, think I see things and people that aren’t there any longer, but I always move forward. Because I can smell that grilled jumbo shrimp with my name on it, can smell the perfume of the Villanova grad students, the writer groupies, in Westy’s or Keenan’s or Casey’s or Owen’s or Flip Flopz or the Anglesea Pub. I might even stop by the Oceanic and drink a toast to auld lang syne, and another in memory of the Jack Rabbit. Life goes on. That river keeps flowing, ready or not, so you might as well grab a raft and ride the rapids, remembering the past though not dwelling in its seductive shadows, its comforting nooks and crannies. We move forward, or we drown. And no one wants that, least of all the lifeguards….

Written By
Ed Mcginnis
More from Ed Mcginnis
Officially, it’s Interstate 476, the Mid-County Expressway. No one ever calls it...
Read More