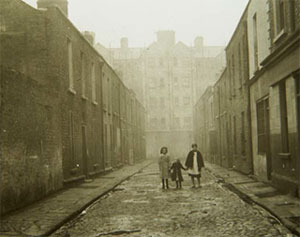 I don’t cry very often, for better or worse. I never did, really, not even as a child. Maybe I didn’t see the point, or maybe I didn’t have a whole lot to cry about. But I did shed a rare tear–more than a few tears, truth be told–while watching an unusual funeral on TV not long ago. It was a memorial service for four men and one woman. I didn’t know them; they had been dead for 180 years at that point. But then, in a strange way, maybe I did know them after all. The five died, along with more than fifty others, under circumstances murky at best. They were buried anonymously in a mass grave in rural Chester County, Pennsylvania, in a place called Duffy’s Cut. Much has been written, said and speculated about the events at Duffy’s Cut in recent years. Documentaries, songs, books, websites and Facebook pages chronicle those events and the efforts to literally unearth the facts, to investigate, to bring a closure of sorts. But for those unfamiliar with the story—with the strange and terrible saga, to borrow a line from Hunter Thompson—it went down like this:

It was June, 1832. A railroad contractor named Phillip Duffy hired 57 Irish immigrants from Donegal, Tyrone and Derry, just arrived off the three-master John Stamp on the Philadelphia docks. The job: to clear land and lay tracks through densely wooded hills and deep ravines some 30 miles west of the city, for Pennsylvania’s first railroad, the Philadelphia & Columbia. The men lived in a shanty; not a shanty town, just a shanty. They were paid 50 cents a day, plus whiskey, for their efforts. There was little for the rail workers to do at night but to drink, talk and smoke their pipes, to share ambitious plans for new lives in an America filled with wonder and endless possibilities.

The worst of the land clearing, digging through hills of heavy, rocky soil with picks and shovels, the cut and fill, took place at Mile 59, a brutally difficult stretch, its cost far exceeding the average for a mile of track at that time. Ultimately that cost, at least for some, proved a great deal higher. Within two months all 57 men and a woman, a cook and laundress, were dead. Some—the exact number is unclear–died as the direct result of the cholera epidemic that swept the East Coast of the U.S. that summer. Their medical care, such as it was, was provided by a quartet of nuns from Philadelphia and a kindly blacksmith. The deaths mattered little to the railroad or to the natives. The men were immigrants. They were expendable. They went into the ground, the shanty was burned and the work continued. There was a railroad to build.

Not all of the men, as it turned out, succumbed to cholera. Exactly how the others died was a dirty little secret kept in a file locked in the executive offices of the Pennsylvania Railroad, successor of the Philadelphia & Columbia. PRR File 004.01C was compiled over a period of decades by a man named Martin Clement, who rose through the ranks to become president of the railroad. What is unknown, and intriguing, is the question of why a wealthy and powerful man like Clement would develop a lifelong obsession with the deaths of immigrant workers, deaths conveniently forgotten by virtually everyone else. Was it personal or professional? Driven by guilt? Compassion? Respect? Due diligence? Some combination thereof? One possible clue is that Clement, as a young railroad supervisor, ordered an enclosure of granite blocks erected at the gravesite, to preserve and memorialize it. He wanted to place a plaque at the site, but was turned down by his superiors. Too expensive, they said, and unnecessary.

After Clements’ death the Duffy’s Cut file was rescued by his longtime assistant Joseph Tripician, and ultimately passed on to Tripician’s grandsons, Frank and Bill Watson. The Watsons eventually initiated an amateur investigation into the matter, an investigation that grew increasingly more professional and high-tech as more people—geophysicists, historians, pathologists, forensic anthropologists and dentists–signed on. The first human remains were discovered in 2009, and the full story began to emerge. No, not all—maybe not even most–of the victims had died of cholera. They had died of blunt force trauma and apparent gunshot wounds. The identity of the killers and their motives, and any involvement of the railroad, has been lost in the mists of time. Was it mass murder carried out by local vigilantes fearful that the cholera would spread, or out of hatred for aliens and immigrants, for people unlike themselves? Revenge for bringing the disease to the area?

A novelist could concoct a scenario, but this isn’t a novel. The fact is that something very bad happened at Duffy’s Cut and when it was over nearly sixty people were dead in a ditch on Mile 59. The dream of a new life in America turned into a nightmare for these immigrants, most of them men in their 20s. Their families were never informed of the deaths. Their sons and brothers, like uncounted others, simply disappeared. It was a heartbreaking story, and when I watched the caskets reburied with tender loving care in a better place, ironically not far from the graves of some of Philadelphia’s great industrial tycoons, I cried. They weren’t tears of sadness, though. Not really. Maybe it was a genetic thing, for someone with roots deep in Dublin and Cork, in Newry and Portadown. Or maybe it was something much more personal. 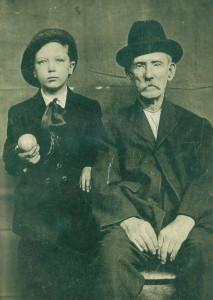 When I first heard the story of Duffy’s Cut, I thought immediately of The Picture. I discovered The Picture in a box in the basement as a child. Even then, it was more than a half-century old. It was undated, but probably taken near the end of World War I, almost certainly on a Sunday, in a Philadelphia studio that catered to immigrants and the working class. The studio may have been located on South Street, near the tiny rowhouse where the family lived. It may have been located on the ground floor of one of the grimy old commercial buildings on Arch Street, an area that I roamed as a photography student, camera in hand, pockets stuffed with lenses, filters and film canisters. What I learned then is that pictures do indeed speak, and they can be more eloquent than any writer or orator.

The Picture is a posed portrait of an old man and a boy, the boy’s hat cocked at a jaunty angle. The boy is rather elegantly dressed by the standards of the day. The old man is not. The shabby clothes that he wears are probably his Sunday best; maybe the pair had just come from Mass at St. Patrick’s. The boy, looking as if he’d rather be elsewhere, holds a baseball in one hand, his fingernails dirty. I showed The Picture to my mom. She sat down, stared at the photo and smiled. It was, she said, a picture of my great grandfather Lawrence Flood and my uncle, Simon ‘Sam’ Harrington. The moment preserved like a fossil in the limestone of time was captured not many years after the family arrived in the United States, at Ellis Island, on a hot August day. A day not unlike another hot August day 80 years earlier, when the workers of Duffy’s Cut met their fate, or vice versa.

One thing about the Irish: they just kept coming, welcome or not, like the Poles, the Jews of Russia and Eastern Europe, the Italians and Greeks and later the Koreans, Vietnamese, Mexicans, Guatemalans, Ethiopians and others. America was their best and in many cases only option, the Holy Grail, the Promised Land. But oftentimes promises, as we all know, are broken. America may well be, as Ronald Reagan liked to say, a bright, shining city on a hill. But there is also a darkness on the edge of town, and dark secrets buried in the woods.

My great grandfather, my mom told me, had bought the baseball for my uncle before their photo shoot out of his meager earnings to hold for the big day, their special Sunday photo, because ‘real’ Americans loved baseball. I thought that was sweet and sad somehow, and illuminative of the hopes and dreams of immigrants, their yearning for both assimilation and acceptance. My great grandfather and my uncle appear very solemn, even cold and stiff, in the photo. They weren’t. They were just working people, uncomfortable in the spotlight of the camera’s flash. I knew my uncle; he was a good man, with a great sense of humor. I never knew my great grandfather, but I knew of him, through my mother’s stories of his kindness and strength, his work ethic and pride.

He worked as a laborer until his health failed, in those days before unions and labor laws, before minimum wages, when proper medical care was reserved for a privileged few. I don’t even know if Lawrence Flood could read or write, born in an impoverished Ireland not many years after the worst of The Famine. He and my great-grandmother were reluctant to join the exodus to America, to leave their home. They did it for their children and grandchildren, so that they might have a better life than any to be found then in the slums of Dublin’s Northside. Lawrence Flood died at an early age by today’s standards. His life didn’t end in violence or tragedy, like the workers at Mile 59, on the Sugarland Curve of the old railroad. But like them, like those that work in the fields, in restaurant kitchens and factories, he was a nobody to the powers that be, invisible and expendable. A source of cheap labor, easily replaceable and even more easily forgotten.

Both of my maternal grandparents died young, my grandfather not of cholera but of influenza. My great grandmother went to work cleaning the homes of the wealthy by day and scrubbing the marble floors of office buildings at night. There were no other options. There was no social safety net to catch and comfort the poor then. There were children to feed and clothe. We all have forgettable days and times in our lives when it feels as if we’re swimming upstream against a heavy current, or drowning. But our problems fade into insignificance when compared to the daily realities faced by those that came before us, that paved the way and paid the price. No matter how bad we perceive our own situations to be, we’re not living in a shanty by a disease-tainted creek. We’re not being buried without name or ceremony alongside the bones of animals worked to death in a haunted place once known as Dead Horse Valley.

Yes, there are undeniable problems with America’s immigration policies, with our porous and troubled borders. Unlike so many, though, I can’t hate the immigrants themselves, people fleeing what they left behind to seek a better life. I know them, like I know the men of Duffy’s Cut and like I know the great grandfather that died many years before I was born. When I look at The Picture now, I don’t cry. I smile. I’d tip my hat, if I owned one. I might even sip a pint of Guinness, for my great-grandparents and grandparents, for those who were lost at that 59th Mile and then were found, and for so many others working so many other hard miles. I appreciate their sacrifice and their courage, appreciate what they did and who they were. None of these people are truly forgotten; they live on, through us. That’s another thing about the Irish and about the children, grandchildren and great-grandchildren of immigrants in general: we have very long memories…