It was late on a glittering Sunday afternoon in early summer, and I was riding my bike around the town that I live in.... 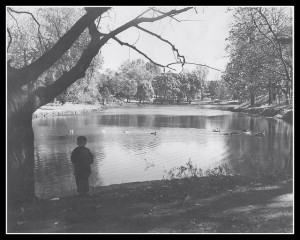 It was late on a glittering Sunday afternoon in early summer, and I was riding my bike around the town that I live in. While I didn’t grow up in this town, I’ve lived here for a long time. All of us tend to take things for granted. Pay little attention to the familiar. Miss changes that are more incremental than seismic in nature. On occasion, however, I look around and smile. I realize that I’m fortunate to live in a small gem of an American town that seemingly hasn’t changed a great deal since Ford rolled out the Edsel with great fanfare and sky-high expectations.

The streets are lined with big old Victorian houses, shaded by soaring century-old oaks and sycamores. We have a town square, a main street, a park, a lake and a charming stone library funded by Andrew Carnegie in 1911. Crime is virtually nonexistent. The police and politicians are honest and efficient. Neighbors look out for neighbors. There is a Victorian Fair, lakeside concerts and a farmer’s market in summer, impressive fireworks on the 4th of July. In fall, the downtown streets are blocked off for a large festival, complete with hayrides for the kids. At Christmastime Santa Claus comes to town, entertaining the gift wishes of throngs of rosy-cheeked children on a sort of throne in the town square. The houses, stores and trees are draped with necklaces of colorful lights, transforming our little Mayberry into a winter wonderland, a magic kingdom.

It’s a very nice town in many ways, one square mile of idyllic verging on Edenic, but outsiders often say that it’s a community that seems frozen in a Norman Rockwell print, a Frank Capra film frame, of an earlier and much different America. At times it does feel as if all of the 7000-plus residents might be characters in some folksy black and white sitcom, circa 1960: Leave It To Beaver, Father Knows Best, The Andy Griffith Show.

The teenagers are almost universally polite, well-behaved and industrious. The schools win awards for excellence and innovation. The churches are still filled on Sunday mornings, the public council meetings well-attended, business conducted with fairness and transparency. There are good restaurants and takeout establishments. Friendly taverns. A well-stocked cigar store. A busy ice cream parlor. A lively community theater that dates from the days of William Howard Taft. Two swim clubs with egalitarian membership policies. The residents are a happy lot by and large, and who can blame them.

On this afternoon several generations of families gather for backyard barbecues, the enticing aromas of grilling steaks, chicken and shrimp wafting on a mild breeze. People sit on open front porches, talking and laughing, sipping cold sodas and beers. Kids play softball in the park, hockey in the street and splash and shout in swimming pools. Friendly people walk friendly dogs. Senior citizens stroll hand in hand. Joggers and bikers make use of the well-maintained paths that wind around the perimeter of the lake. A family of ducks glides across the water’s surface, kites fluttering above. Fathers and sons fish from a shady dam, feet bare, pant legs rolled up.

Everyone smiles and nods and says hello; there are few strangers in town. The air is redolent of chocolate and roses, the former courtesy of the colorful, well-tended gardens of sweet old ladies, the latter via the Willy Wonka Factory—actually a French-owned cocoa processing plant–in an adjacent town. The Jack & Jill and Mister Softee ice cream trucks move slowly down quiet residential streets, a friendly competition, each with their own distinctive jingle, familiar to generations of summer ice cream lovers.

Men lovingly wash and wax cars in driveways, some of these classic fin-tailed beauties from the 50s and 60s, reinforcing the not unpleasant sensation that you’ve stumbled into the Wayback Machine. Couples picnic on the grassy hill above the lake, just as they did in the waning days of the 19th Century, when the town was founded as a resort for wealthy Philadelphians. Yes, it might well be 1960, happy days with Ike in the White House and that charismatic young senator from Massachusetts running for president. We could be listening to Elvis, the Everly Brothers and doo-wop on the radio. We might be headed to the drive-in to watch Troy Donohue and Sandra Dee discover the joys of first love in A Summer Place, with a soothing soundtrack by Percy Faith.

But a closer look, a second glance of the mind’s eye, reveals certain details just beneath the placid surface, just beyond the movie back lot façade, unremarkable changes not immediately apparent or fully absorbed. Some of these are things that are known, facts in evidence, and not even seen, really. The emissions of both the automobiles and the sprawling industrial plants down by the river are strictly regulated. The community hospital hasn’t used an incinerator in years. Few people smoke cigarettes. The air is clean and clear. The freshwater marsh beyond the lake, once a dumping ground for junked cars, rusting shopping carts and the occasional dead body, has been reborn as a National Wildlife Refuge, American Eagles riding wind currents in the sky above town, wild turkeys and beavers grazing in backyards.

The TV’s in the houses, and now in vehicles and in hand as well, are no longer black and white and as bulky as Aunt Peg’s living room sofa. They receive more than the handful of channels available back when Sunday nights meant an appointment with Ed Sullivan and a visit to the Ponderosa. The words ‘laptop’ and ‘notebook’ have entirely different meanings. Back then, phones, for better or worse, or for better AND worse, were tethered to cords and they weren’t very smart at all. If you wanted to message someone, you used Western Union. You listened to music on your transistor radio or on the hi-fi. Games? Take your pick: Scrabble, Monopoly…or if one dared tempt the fates, the exotic and ever-mysterious Ouija Board. For research there was the library, with its card catalog and the ancient and stern librarian, index finger pressed to lips, urging both decorum and silence. Most of the men and women, and their kids, had similar hairstyles and clothing; it was an era of regimentation and conformity. ‘Different’ was suspect and was neither appreciated nor encouraged. ‘Different’ relocated to the bohemian anonymity of New York City or the more tolerant climate of California.

Today, the softball coach is Chinese-American, an engineer at the helicopter plant. A young Mexican couple, new citizens both working two jobs, takes their baby to the park in a stroller, a tiny Chihuahua leashed to the stroller trotting happily along, a proud part of the family. At a number of those backyard barbecues, the grandchildren are biracial. Some of the food being served is Indian. Grandpa listens to tunes on an iPod while he texts an old war buddy on the sort of Galaxy not made by Ford. Grandma Skype-visits her sister in California. The grandparents healthier and far more active at seventy than their own grandparents were at fifty.

The kids, the descendants of Woodstock, Haight-Ashbury and Monterrey, of Selma, Birmingham and Stonewall, may not be able to articulate the dictionary definitions of individuality and freedom of expression, but they live those definitions daily and joyfully. Tattoos and piercings, once strictly the province of sailors, marines, ex-cons or gypsies, are proudly displayed. One of the ice cream vendors is an Egyptian immigrant, saving to bring his elderly parents to America. The old notary public office is now a hookah lounge, where middle-aged men of Middle Eastern origin and young native-born college students debate the issues of the day. Some of the local business owners have come a long way to get where they are: from Ireland, Italy, Greece, China, Guatemala, India and Israel.

Of the couples picnicking by the lake, one is African-American, another consists of a white guy and an Asian woman, a third couple is not Troy Donohue and Sandra Dee but rather two attractive young women holding hands, appearing very much in love and possibly headed to the altar…though perhaps not in this state. Not just yet. No one pays any attention: what used to raise eyebrows and ire is the New Normal. Yes, things have changed, even here in the steady-beating heart of Middle America. The summer place ain’t what it used to be. At the ice cream parlor, vanilla has been supplanted by blueberry razzle with rainbow sprinkles

Not everyone, of course, welcomes change with open eyes, open minds and open hearts. Some people remain allergic to tolerance. Resent diversity. Fear those not like themselves. They despise the pervasive power of technology, dream of a past that was better in so many ways, a time when things were right. A simple time when the soda jerk at the drugstore–owned by a wise and kindly pharmacist known as ‘Doc’–wore a letter sweater, wasn’t named Jose or Ikeam and didn’t have a pierced nose. Others realize and accept that things are what they are, that Now has arrived, and they adapt and embrace that reality, focus on the positive rather than the negative. You can’t turn back the clock without fracturing the delicate mechanism, without being trapped like a fossil in the dense limestone of time.

Me, I’m riding a bike through the sunny landscape of subtle change and it occurs to me how easy it is, both literally and figuratively, to simply switch gears and keep on rolling, rolling merrily along. The Human Circus operates out of a bigger tent, but it’s still as much fun as ever for those that retain a childlike sense of wonder at it all. The calliope plays on, the tunes a bit more eclectic. Norman Rockwell might have to paint a different picture these days, apply some more colorful brush strokes, add multiple levels of texture and depth. 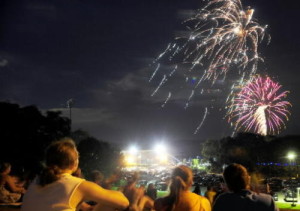 I think Norman would have welcomed the challenge. Would have loved to set up his easel on the banks of our picturesque little lake, roll up his sleeves and get to work capturing images of a community, and a nation, in transition. A visionary with a pipe and a bowtie, he would have known instinctively that the road that curves around the shore of that lake leads toward brighter days, not into darkness.

Written By
Ed Mcginnis
More from Ed Mcginnis
From time to time, as a mental exercise or as a torch...
Read More