Sometimes writers worry that we’re losing our creative mojo, abandoned by our best friend: the power of imagination. It all starts with dreams…or doesn’t.... 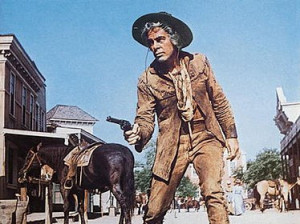 Sometimes writers worry that we’re losing our creative mojo, abandoned by our best friend: the power of imagination. It all starts with dreams…or doesn’t. While I rarely derive many actual writing ideas from dreams, my dreams are often intense, highly detailed and evolve as story arcs. They prove that I’m in close contact with my subconscious; a job requirement. Occasionally, however, the story arc fails to get off the ground, dreams fizzle like a defective 4th of July bottle rocket and you’re facing a potential layoff from the literary assembly line.

Three nights ago I dreamed that I was washing my hands at the kitchen sink. With soap and water. The next night I dreamed that the power went off here in my luxury penthouse with the priceless views of the Delaware River marshes. Circuit breakers, my brother in law advised. Try hitting the circuit breakers. I did. Power was restored. Electrical power, at least. But I was becoming increasingly anxious. My creative powers, such as they are, had seemingly dimmed even as the lights came back on. I felt like a major league pitcher, a closer, who trudges out to the mound game after game wondering: is this the night the sinker fails to sink, the curve doesn’t, and I’m lit up like the Ginza in Tokyo? We’re all haunted by visions of going to the proverbial well once too often, and finding that well dry.

But then, fortunately and just in time, the dam broke, the well refilled and the comeback began. In the Old West, of all places. I was an infamous gunfighter/bounty hunter on the dusty streets of 1880s Tombstone. I was trying to reform. I’d gotten a straight job pasting labels on envelopes and packages at the post office. The fact that I needed to be trained on how to properly accomplish this task didn’t seem to bode well somehow. A large group of frantic townspeople rushed into the post office. They reported that the bank had just been robbed, by the ‘Quantrill Gang’. The Q Boys had made off with the mine payroll and abducted the bank president’s daughter.

Apparently I was the only person in town capable of successfully tracking down and dealing with the bad guys and rescuing the daughter before she fell victim to ‘unspeakable acts’. Would I put aside my promising label-pasting career, dust off my trusty rifle and well-notched Colt sidearm and save the payroll and the young lady’s virtue? I had to think about it. “Okay,” I said finally, and reluctantly. “But I have a dentist’s appointment first, and then I have to do my laundry”. Heroes aren’t what they used to be, not even in dreams. But it wasn’t about high noon and heroism in this case. It was about the triggering of stories, about exhuming my subconscious from a premature burial on Boot Hill. 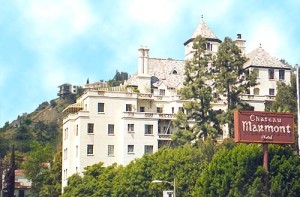 Last night the creative comeback was fully realized via the brilliantly illuminated boulevards of Dreamland. I was poolside at the Chateau Marmont, the fabled, hilltop-hugging white castle of a hotel in West Hollywood, with Ginger VanHeusen. Who the hell is Ginger VanHeusen, you might well ask? An aging B-movie actress with one facelift too many, wearing a one-piece white swimsuit, high heels and more make-up than a convention of drag queens. The twin demons of age and gravity were tugging breasts once high and mighty inexorably south, toward Encinitas, Chula Vista and the Mexican border.

Ginger was hitting on me. I had a “Steve Cochran Thing” going on, Ginge informed me, and had I read the chapter in her book about Ginger, Steve and their afternoon of carnal indulgence in the leaky rowboat off of Catalina? Luckily enough, given my master’s degree in Cinematic Obscurity, I even knew who Steve Cochran was. A forgotten Fifties heartthrob with a boatload of sleazy charm, better known for his womanizing, partying and prodigious endowment—not the sort provided by the MacArthur Foundation—than his screen credits. But unlike Steve I was all about the business. I wasn’t going to be distracted by any spider-veined set of septuagenarian gams or the coquettish batting of extravagant false eyelashes.

I’d been hired to script the film adaptation of the thespian’s controversial tell-all autobiography, “Tight Pants, Loose Morals: The Ginger VanHeusen Story”. I’d landed this plum assignment after I wrote the screenplay for a surprise hit, “The Marijuana Androids”. This was a campy, minimally budgeted sci-fi black comedy but the joke had sailed like a puffy cloud of pot smoke right over the empty heads of quite a few people. The film exploded like a kerosene-filled bong at the box office after it was lauded by conservative politicians and the Christian Right as a powerful anti-drug message for America’s youth. I was invited to appear on talk shows to explain why drugs are a bad thing. I declined, citing ‘professional commitments’.

In any case, the insanity was back and welcomed with open arms and a kiss hotter and wetter than any Ginger VanHeusen had ever planted on a co-star. With creative artists insanity, the sort of insanity represented by dreams that roar out of the tunnel of the subconscious like a speeding locomotive, transporting one to exotic locales and to memorable encounters with quirky characters, is a necessity. Pedestrian dreams about hand washing and circuit breakers? That won’t cut it in the big leagues. You need to check into that Chateau Marmont of the mind and pop the cork on the bubblicious intoxicant of inspiration. Yes, a little bit of insanity goes a long way. Insanity helps to pay the bills. And paying the bills is always a good idea. Otherwise the power is turned off for real and not even the circuit breakers, or the luminosity of your dreams, will chase away the darkness…