Quite a few people have asked me about the title of my novel “The Forever Family”, about its origin and meaning. While there is... 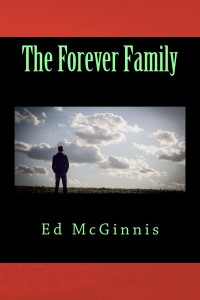 Quite a few people have asked me about the title of my novel “The Forever Family”, about its origin and meaning. While there is a mysterious, and lethal, group known as ‘The Forever Family’ at the heart of the novel, the genesis of that group’s name and of the book’s title actually dates back to the summer before my senior year in high school.

It was a hot, humid July afternoon. I was climbing the wide, steep front steps of the 69th Street Terminal, terminus for dozens of bus, trolley, el and rail lines linking Philadelphia and its western suburbs, in my hometown of Upper Darby, Pennsylvania. I was approached, or intercepted, by a quartet of attractive young females. They were led led by a small blond. She had long straight hair, wide blue eyes and a blissed out, ‘I’ve got a secret’ smile. The girls sported tight, faded jeans and handmade jewelry, were barefoot or in sandals and were braless in diaphanous white peasant blouses. Two wore flowers in their hair. The idealism and naiveté of the hippie movement had pretty much receded into the smoky, pungent mists of history by then. Still, the group looked, in the vernacular of the day, like ‘hippie chicks’. Their idea of excitement would involve Earth Day, macrobiotic foods, geodesic domes and deconstructing Strawberry Alarm Clock albums.

“Do you sing?” I asked, eyeing the guitar case that one of the girls carried.  I thought possibly they were a less mainstream version of the Partridge Family. Maybe they’d do a cover of Joni Mitchell’s “Woodstock”, I’d drop a few bucks in the guitar case and that would be that.

“We do sing,” the blond said earnestly. “We sing about Jesus and about God’s love!”

I was more into Zeppelin personally but I wasn’t in a hurry and the God-love advocates were cute and rather pathetic so I stood and listened to their spiel. This concluded with an enthused exhortation to attend a ‘rap session’, complete with food, music, fun and enlightenment at the ‘fellowship’. This people’s temple was a rundown rented house a mile or so away where the young ladies lived communally with other members of the Forever Family. Would I PLEASE come to their open house, see what it was all about? Learn more about Jesus, the Bible and the Forever Family?  I had little interest in organized religion–or in this case, disorganized religion–in Bible study or anything of that nature. 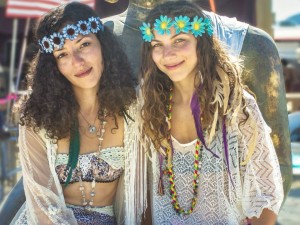 I wasn’t looking for answers: I had all of those, or so I believed. I wasn’t lonely or disaffected, naïve or gullible, a loner or lost soul: the type of sheep that so often flock to dubious places while grappling with questions of faith and existence. Still, I was intrigued by the group’s name: The…Forever…Family. It sounded profound, melodramatic and portentous, ripe with possibility.  It was heavy, baby, like a Hermann Hesse novel.

The Forever Family, or FF, turned out to be another of the then-proliferating evangelical Christian groups that dodged the devil’s raindrops beneath the umbrella of the ‘Jesus Movement’, an unholy marriage of Christian evangelism and hippie sensibilities.  The Family was founded in a park in Allentown, Pennsylvania in 1971 by a ‘visionary’ named Stewart Traill, a massive, bearded and charismatic former vacuum cleaner repairman. (No, you can’t make this stuff up). Traill was either the Messiah or like so many of these types had a direct line to God and thus was able to serve as conduit to and interpreter of His word. More out of curiosity, boredom and  a hope that I might be ‘saved’ by one or more of the group’s heavenly young female ‘witnesses’– I attended a few sessions at the FF house. I met the elusive and enigmatic Stewart Traill.

I’d like to be able to say that it was a vivid, memorable and meaningful experience that changed my life in many ways. It wasn’t, though, and didn’t. I decided that the Forever Family was a dysfunctional balloon full of hot air. They were a bunch of Jesus Nazi’s, and nothing good comes of either group think or blind obedience to any cause. The edge of Forever wasn’t about the individual or one’s relationship with God. It was more akin to totalitarian socialism: think what we tell you to think, follow our blueprint for your life and oh by the way: give us your money!  This gig, like most similar organizations, was a pyramid scheme of sorts in which the money and the honeys flowed to the top. The downtrodden disciples were expected to suffer for the cause, and I wasn’t much for either suffering or causes.

The Forever Family’s semi-coherent philosophy or faith system appeared to consist of a lot of cut and paste, color-coded and subjectively interpreted Bible passages blended with the maximum leader’s twisted Traill markers. It would make little sense to any rational person, or to anyone who wasn’t weak or credulous. As with most religions and religious groups there was a plethora of silly, pointless rules, rules adhered to in this case by people that were nice enough and well-meaning but creepy, zombie-like Kool-Aid sippers, Stepfords and True Believers, driven to delirium by the bite of the rabid dogma.  Unlike the Children of God or L.A.’s Source Family the FF had no collective sense of humor, weren’t bizarre or flamboyant enough to be entertaining, didn’t engage in free love or group orgies or employ weed and acid as tools of spiritual enlightenment.

It was depressing and frustrating watching bright, attractive young people throw away their lives—some, literally, forever—powerless in the grip of some perceived higher power, puppets dancing on a master’s strings. While certainly exploitative and no doubt damaging in some ways, The Forever Family was never really more than a niche cult, a B-team Jesus squad. It was more innocent, more pragmatic and more congenial than most of the competition: little real violence, no mass suicides, no members kidnapped by deprogrammers, no doomsday clocks or UFOs, etc. The FF later morphed into the more prosaic COBU, The Church of Bible Understanding. Membership spiked and gradually declined. People drifted away, realized that they’d been had, had wasted their time, had been sold a bill of goods with a Biblical cover and a slave labor ethos inside. They had followed the godforsaken Traill into a purgatory of indentured servitude, pointless piety and endless sacrifice.

Messiah Stewart Traill, the self-taught alleged Bible scholar, was no dummy. Stewart got what he wanted out of the deal, I suppose. He was last heard of living in a mansion in Florida, purchased through the sweat equity of his blind faith followers. And in a strange way I got something out of my brief flirtation with The Forever Family as well: a phrase long buried in the crypt of the subconscious that would rise like the undead into the bright light of necessity many years later. What goes around comes around and comes full circle—a name and concept that I first heard at 17 on the steps of the 69th Street Terminal resurrected when I needed a title for a book about family, an organization akin to a cult, charismatic leaders and committed believers.

The phrase ‘The Forever Family’ and the elusive definitions of the words ‘forever’ and ‘family’ always stayed with me if little else from those days did. I can’t say exactly what The Forever Family refers to in the novel—that would be the ultimate spoiler.  But what I knew instinctively at that time and have been reminded of many times since is that ‘family’ takes many forms and that ‘forever’ isn’t always what it seems. I don’t envy the brothers and sisters of The Forever Family their sad and wasted lives in the pursuit of a failed dream born of a misguided love for Jesus and the hero worship of false prophets. But I am eternally grateful to them, and to the Lord, for the concept, the title and the memories.

Written By
Ed Mcginnis
More from Ed Mcginnis
The published version of THE BLUE ROUTE opens with an attempted hit...
Read More