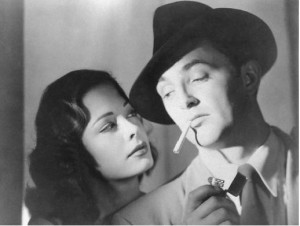 ‘The lonely cool before dawn’ is of course a great, evocative line from one of the best songs ever written: Springsteen’s “Thunder Road”. It’s also my favorite time of the day. I came into the world at three a.m. and I’ve been inordinately fond of that hour ever since. I don’t dislike bright mornings inhabited by happy people. But like werewolves and vampires, bats and Barn Owls, I love the moon more than the sun. I prefer neon to natural light. I’d rather hear the comforting chirp of cicadas and crickets in dark grass than song birds, commuter traffic and church bells. Even as a toddler, I was reluctant to go to sleep. I was afraid that I’d miss something, and I never, ever wanted to miss anything.

When I was ten, eleven, twelve, my mom would get up to use the bathroom after midnight and was not at all amused to find me watching TV in the dark living room. But there were things that interested me much more than sleep: syndicated cop shows. 1940s film noir with machine-gun dialogue. Lurid 50s melodramas featuring high school dragstrip hoodlums, pill-popping beatniks and bad girls in push-up bras and Capri pants.

Other kids watched Disney movies, innocuous comedies and James Bond. I watched Out Of The Past, Key Largo, Touch Of Evil and On The Waterfront. From an early age I learned to appreciate flawed heroes and women with shady pasts and good hearts looking for love in all the wrong places…and finding it. I was drawn to stories of compromised individuals and conflicting agendas, of heavies and hustlers that needed to be dealt with and dispatched. All of it playing out in moral shades of grey in a nocturnal wonderland, to the tune of Dexter Gordon’s tenor, Fats Navarro’s bop trumpet and Bill Evans’ piano.

The late hours, the unusual tastes in books and films; it all might’ve been a great deal more troubling to the adults in my life if I had been a poor student, a ‘loner’. The sort that sat in the back of the classroom, surly and silent, finished dead last in the spelling bee and was never chosen when sides were drawn up for games. But I wasn’t that kid. Staying up until the wee hours watching The Untouchables and reading my father’s Raymond Chandler novels? It never prevented me from getting good grades, making a lot of friends and being well-liked by teachers. I just had a few idiosyncrasies, reluctantly tolerated.

The best moments spent with my Dad as a small boy weren’t the daylight fishing trips, the Phillies matinees or the visits to his beloved racetrack. They were those times when he’d take me on nighttime tours of the vast, eerie oil refinery where he worked. I’d stare in fascination at thousands of twinkling lights atop the towering steel superstructures, at the reflection of the lights on the dark mirror of the river’s surface. At flames from the burnoff tickling the sky, at the machinery whirring beneath what stars could be glimpsed in South Philadelphia. It led to a lifelong interest as a writer and photographer with industrial plants and factories at night, to an ability to see beauty in places and things that others found ugly, intimidating or unremarkable.

For a time we lived around the corner from a police station, near a bus and rail terminal and several bars. At ‘bedtime’ I’d sneak up to the attic and sit by an open window on hot, still summer nights. I didn’t want to waste time on sleep. There were things going on out there, life on the streets. I’d watch the busses, trolleys and el trains arrive and depart, discharging weary passengers. Watch shift changes at the police station, the cruisers and paddy wagons rolling out. Watch the cops bring in arrestees, often cuffed and snarling, occasionally requiring a beatdown. I’d watch drunks stumble home from the bars and wonder what had led them to that state, wondered what their stories were. I always wanted to know the story, wanted to know what made people what they were, what drove them to dark places and toward a slow self-destruction.

On winter nights I’d smuggle a transistor radio into bed with me. I’d turn the AM dial, picking up stations from distant cities, captivated by the vastness of the American night, by voices on the wind and by the realization of all that was going Out There, in those deceptively lively hours between darkness and dawn. I felt privileged, privy to secrets of which most people, sleeping through it all, were blissfully unaware.

When I bought my first car, a convertible, I would take long, aimless late-night drives, just to feel and see and smell the night. It was on one of those late-night drives that I first discovered the Blue Route, then lying abandoned and strangely beautiful in the moonlight. It was a peculiar and perilous time on those deceiving suburban streets. A time when too many young people, most of whom I knew, were dying from unnatural causes, bodies turning up in the Schuylkill River and the Tinicum Marsh. A time of dubious suicides and debatable drug overdoses, when the nights in Delaware County bloomed with jasmine and conspiracy. Too many lives ended prematurely in those hours between midnight and daybreak, in pockets of greater darkness that existed within the night.

When I lived in the city, for reasons both personal and professional I was regularly out and about after dark. I met beat cops and reporters, hookers and pimps, drug dealers and bouncers, the devotees of all-night diners and donut shops, musicians, the homeless. The people of the night always seemed more interesting, more cynical and knowing, funnier and more fun, than the day trippers: the shoppers and shopkeepers, buttoned-down businesspeople and students. I didn’t write their stories down then, any more than I wrote down the sad tales of dead friends and murderous acquaintances as a teenager. But I watched and listened, and I filed it all away for future reference.

The opening scenes of The Blue Route and the upcoming Night Train Express take place in the Hollywood Hills at night; a homage of sorts to the first time I saw Los Angeles at night, and fell in love. I was like so many others before and since mesmerized by the magic carpet of lights that unfurls for miles across the LA Basin from the San Gabriel’s to the Pacific. I was enthralled by all of the possibilities, the dreams and drama, romance and ambition, down there. By the neon-lit clubs on Sunset Strip, the majestic and mysterious Chateau Marmont, the cars cruising endlessly on Hollywood and Van Nuys Boulevards. And by the dark canyons that cut into the hills, inhabited by coyotes, movie stars and the ghosts of old Hollywood, by individuals with sinister and suspect motives creeping amidst the bougainvillea. 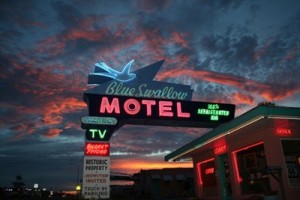 My writing is not generally autobiographical—I’m not a sharer by nature–but like Flanagan in Wildwood, I’ve stood by motel room windows at the Jersey shore in that lonely cool before dawn, looking out. Like Flanagan, I loved the Doors song “End Of The Night” the first time I heard it as a kid, a song dripping with atmosphere and imagery. Like Jim Morrison I wanted to take the highway to the end of the night, take a journey to the bright midnight. When I first discovered the paintings of Edward Hopper and the night train photographs of O. Winston Link, I knew I’d found a couple of kindred spirits: artists intrigued and absorbed by the seemingly banal, by the freeze-framed lives of alienated loners alone in the night, by locomotives and freight cars.

I always loved the summer nights best, that time when the night grows cool and still and the moon rises. All seems peaceful and quiet on the surface…until you look and listen more carefully. You hear the insects whistling in the grass, the chatter of invisible birds in the trees. Cats prowl. Rats slink. Weird nocturnal beetles crawl across the sidewalk. Invisible sticky webs of mystifying origin materialize. Industrious possum families forage for food. Trains rumble in the distance. You can hear sirens far away, foghorns and the clang of channel marker buoys on the river, the drone of planes far above.

Listen to the unrelenting whine of the big rigs out on the highway, the Diamond Reos and White Freightliners hauling trailer loads toward morning. A phone rings somewhere, and you know it’s probably not good news. No, not at that hour. You smell a man’s cigar, a woman’s perfume, the faint aroma of burning cannabis; sources unknown and unknowable. Someone cries. Someone throws up. Someone urinates. A bottle shatters. A song plays. An argument here, sudden laughter there, the rhythmic creaking of a bed somewhere else. A single cough. The humming of an army of dripping air conditioners working overtime on hot August nights. Smell the honeysuckle, the diesel fuel, cheap booze, nameless industrial emissions.

Mysteries multiple and complex unfold in the shadows. People are doing things they don’t want seen, or known. Cheating. Dealing. Conniving. Stealing. Breaking and entering. Selling illicit products and services, themselves. The night is a time for secrets; the darkness camouflages many things. You hear hushed conversations in the mouths of alleys, see money changing hands. Was that a gunshot out there somewhere, or merely a car backfire? A cry of passion, or of pain? A man works in a garage, listening to country music on a radio. Is he a shift worker or insomniac or is he hiding from something: the wife, obligations, daytime pressures, frustration or failure?

Trucks are unloaded in the pale yellow glow of supermarket and factory docks. Funeral homes discreetly pick up the recently departed. You hear the echoing footsteps of people walking after midnight, some faster than others, but where to and from? Police and paramedic units, lights flashing, converge on the Hot Sheet Motel, responding to a ‘disturbance’. A dark car slowly rolls by, headlights off, but why? Cigarettes flare to life, tiny red dots in the murky darkness beneath the soft hiss of neon. You hear jazz and blues spilling from bars and roadhouses, a bright, smoky, whisky-softened world within glimpsed through open doors. The blues aren’t about noon; the blues are all about the joy and pain of midnight.

As a novelist you know instinctively that while the best stories may be set in motion in daylight, they invariably play out at night. As a crime novelist you understand that somewhere, beneath the haunting light of a Harvest moon, people are being killed. Listen and you might hear the scrape of the shovel against excavated dirt, the sound of something slipping into the river from a mossy pier.

People ask me if I find the photograph of the moonlit highway on the Blue Route cover and the website or the shot of the night train on an earlier blog post frightening or disturbing. I don’t, because I’ve never been afraid of the night or the things and people that are out there. Not at all. The road that winds through the darkness toward the faint burgeoning light on the horizon isn’t scary. It isn’t a lost highway. While it may not be what it appears to be, it’s rife with promise, and with surprises. It always leads somewhere, and whether that road leads to a dark place or a bright one, I’ve found, is largely up to us to determine.

Maybe one day I’ll be a cheerful day person, morning coffee in hand. I’ll embrace the sunlight and the happy people, and their stories. Then again…maybe not.

Because it’s all about the noir and about a kid that watched old movies when he should’ve been fast asleep, that sat by the attic window on summer nights, taking it all in…