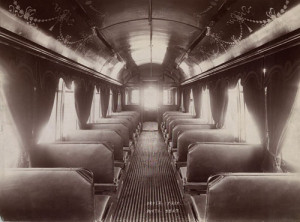 When I was small I used to go for walks with my father. My favorite destination was the old J.G. Brill Company factory adjacent to some railroad tracks not far from our house. Dad had worked there briefly as a young man. At one time the sprawling Brill complex was the world’s largest manufacturer of trolleys and rail cars, employing thousands of workers. By then however the facility, abandoned for years, had been reduced to a spooky wasteland of massive derelict buildings, discarded industrial parts rusting away beneath overgrown weeds.

I asked my father endless questions about the factory, about its history and the reasons why it had closed, about the company’s products and people. I wanted to know what the place had looked like, been like, when it was still extant. Dad provided some of the answers, told me what he knew and what he remembered. But I always wanted to know more, needed every last detail. I had an insatiable curiosity about things, a relentless dedication to what I call ‘The Why’. I interrogated my mom, my uncles and a newspaper reporter neighbor about the Brill factory, gathering information. I’d walk around the site, hunting for artifacts and answers, mind-mapping and visualizing. Pondering.

Finally one day, probably out of sheer exasperation, my father said: “YOU tell ME about the place. It’s your turn. It’s story time, kid.” I looked around, thought about it and began to tell him a story. I think Dad got more than he bargained for: the old amateur boxing champion looked as if he’d just taken a left hook to the solar plexus from Sonny Liston. I didn’t tell the story he might have expected. I told him a story about the ghost of Johann Brill, the company’s founder, and his late night visits to the factory. Told the story from Johann’s point of view. I even threw in a German accent for good measure. I BECAME Johann Brill, at least for that moment.

Dad nearly swallowed the unfiltered Chesterfield he was smoking at the time. “How did you come up with THAT?” he asked. How did I, as a small boy, conjure up and inhabit the ghost of Johann Brill, a man I actually knew very little about? I think it stems largely from loving facts and loving stories and having both a desire and an ability to marry what seems on the surface an unlikely, mismatched couple.

If you think of the brain as a vast filing system, organized chaos, it’s about finding, selecting and retrieving the right files at the right time, very quickly, and then shuffling those files like a deck of cards in the dexterous and deceptive hands of a riverboat gambler. The scientific, or biochemical, explanation? With creative artists, the brain’s neurotransmitters apparently work in dissimilar ways, are tuned to a different wavelength, than those of others who may be equally intelligent.

Scientists will tell you that it’s all tied to the dorsolateral prefrontal cortex, to cognitive shift and cognitive flexibility, executive function, to an ability to more effectively access both hemispheres of the brain simultaneously. Probably. But it’s also about having, and developing, a deeper, almost obsessive level of curiosity regarding places and people. It’s about loving people and their stories and wanting to know what makes them what they are, about what has led them to the places they find themselves, or end up. It’s about always asking questions–why? How? What if?—then cramming the answers into a suitcase and hitting the road, hitching a ride into the heart of Story Time. 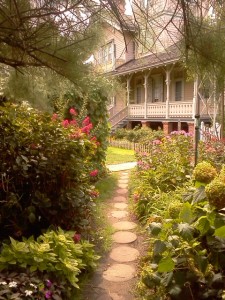 In part, as with the Brill factory and its founder storytelling, or professional prevarication, also has to do with extrapolation from available evidence and extraneous source material: books, TV shows, movies, news reports, visual cues, life experience. It’s a visit to the familiarity of that file room of stored memories. A trip into the mysterious world of the subconscious, a place in which we know things we have no business knowing but do somehow.

I’d watch trains and trolleys—some of them Brill Company products–roll through the night as a child, fascinated. I wasn’t so much interested in the trains per se, but in the trains as metaphor and as vehicles not of conveyance but of stories about the places they were going, about the lives of the passengers. I didn’t KNOW where the trains were headed, where the riders were coming from or going to. But then, I didn’t have to; I could make it up, and did. You see the movie in your mind. You know how it plays out. See how to shuffle the story cards, how to find the aces and jokers hidden in the deck.

Facts, as I knew instinctively that day with my dad, are a malleable commodity, like sculptor’s clay, or Play-Doh. Facts are what you make of them; a starting point, a framework for the construction of a story. I always loved to wander through the remains of things that no longer were—abandoned factories, deserted motels, mothballed ships, ruins, ghost towns in the California desert–and envision what was; time-lapse photography on the projection screen of the mind. Time and history may be shrouded in mist, but if you look long enough and closely enough, the indistinct shadows are illuminated by the bright light of possibility. And Story Time is, if nothing else, all about possibilities.

Creativity may be a gift from God or genetics, a fortuitous freak of brain circuitry and biochemistry. But it’s also a skill, a muscle that can be developed by working it repeatedly. Writing novels involves working a lot of different muscle groups to the point of exhaustion. But contrary to popular belief, novels aren’t primarily a matter of creativity but rather a triumph of persistence, or obsession. Not so much about the ‘idea’ as about a series of ideas, intricately interconnected scenes, a story sustainable for 400 pages. It’s about showing up every day and pressing on, grunt on the literary assembly line piecing together the product. Creativity, Story Time, is also a defense mechanism. It’s about control: dodging the harsh realities of life and remaking or reimagining the world as you’d LIKE it to be. Wishful thinking and wish fulfillment, carried out with pen and computer keyboard.

It’s about rewriting history, both of yourself and of the world. Creating a world in which people say and do what you want them to. Love blossoms, love lasts. People live happily ever after. Friendships endure. Murders are solved. Justice is meted out. The homeless find homes. The lost find themselves. Dreams come true. In real life? Not so much. Not nearly often enough. So you make it up, if you can. If you care to. Create a better world, a parallel universe.

People often ask of writers: where do you get your story ideas? The answer is everywhere. Sometimes, as with “Wildwood” or “The Blue Route”, in places close to home and close to the heart. In the shadows behind the neon, the dark places beneath the piers, in a resort town you’ve known since you were a toddler. Beneath the surface of a troubled dead-end highway in your own back yard. The familiar viewed from a different perspective, through a different lens; that synthesis of fact and fiction.

Sometimes the stories come from other places, or from a buffet of ideas. “Night Train Express” involves a convergence of themes that reappear in my fiction: the ways in which we define friendship. Personal debt, responsibility and redemption. The strange, unlikely paths to love. How the past inevitably impacts present and future, part of a fluidic continuum. It’s a story that in part grew out of a book I once read about a forgotten subplot of the Vietnam War and from a long-time fascination with Hollywood and actors. Not stars but actors who were once successful and no longer are, and the ways in which they are forced to reinvent themselves. On another level it’s about a man haunted by things he saw at a railroad crossing as a boy. But in this case Story Time really developed from a photo I found once and never forgot. It was a photo that most people would have turned away from in revulsion. But sometimes you have to embrace the devil, not run away from him. Confront the demons, your own included.

It was a stark black and white image, sad but compelling, of a man cut in half by a train. I looked at the photo and saw not something sickening but rather the beauty of possibility. I saw a story. I wanted to know about the man on the tracks. I stared at the photo, at the victim, the cops, reporters and coroner, at the night beyond. Who was he? Where had he come from? Why was he there? I’m not really mechanically inclined; I can’t even a change a flat tire, and don’t especially want to. But I do love puzzles, love to take things apart and put them back together. Like an investigator, I had questions about the victim of the night train. Accident? Suicide? Murder?

As with Brill Factory, Blue Route and Wildwood, I visited that file room and ran through everything stored there, retrieving what I needed. My mind ran through various options and scenarios. I settled on one finally. No, I didn’t know the man’s story in fact any more than I knew the story of Johann Brill. But I could peel the layers from that photo and scene and build the story from the ground up. In the process it becomes not only or primarily the victim’s story but that of the novel’s protagonist and ultimately of the author. It’s not so much about the miserable fate of the man on the tracks but rather another man’s obsessive search for answers about that fate, where that search leads and what is learned along the way.

The ‘experts’ can try and explain how the creative process works. They never fully succeed. They don’t KNOW. I can’t explain it all either and I’ve been doing it for a long time, for fun and profit, as a labor of love. In many ways it is inexplicable, an enduring mystery, a hall of mirrors. Imagination, intuition, curiosity, obsession, extrapolation and empathy all collide at the cerebral crossroads, working memory working overtime: a riot on the hippocampus, the frontal lobe like a raging hillside brushfire in the Malibu night. It’s like being a high-stakes gambler with dice in hand and the chips stacked high, a tightrope walker, race car driver, action junkie, thrill seeker, rider on a wildly careening roller coaster.

What’s it like when Story Time kicks in? When the connections are made, when those aberrant neurotransmitters switch into overdrive and link a vast array of disparate multicolored dots? The scientists can’t tell you that. They don’t feel it. Don’t live it. They can only study it, a safe distance from the fire. I can tell you, because that part isn’t a secret or a mystery. It’s like an exploding incendiary flare illuminating a dark night. It’s an addiction of another kind. 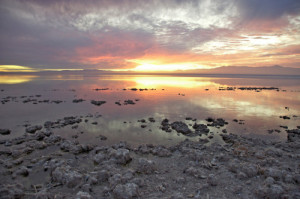 The addiction of finding the story and telling it is like turning the ignition key on the Maserati or Charger that Jack Lynch drives in “Night Train” or Des Hughes’s Roadrunner in “Blue Route”; the engine roars to life, the moonlit road opens up ahead and the trees rush past in a blur. A series of doors open and you tumble in and see the world, the universe beyond, the limitless horizon of possibilities—at its best better than gambling, sex or drugs, a natural high.

It’s magic. It’s friendly ghosts. It’s Story Time. And I love it as much now if not more so than I did as a kid with my dad all those years ago, in the ruins of that old factory in Philadelphia…